Please tell me about the Trinity... 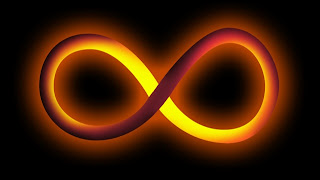 The Trinity is a concept that has baffled many, caused many to be deemed as heretics, divided branches of the Church, and still remains confusing today.  There is a certain mystery to the Trinity, which cannot be explained.  In thinking on the complexity of the difficulty in grasping the reality of the Trinity, I experienced a certain cerebral frustration that reminded me of a math class that I took in College.  As I studied Discrete Mathematics (basically math without numbers), I experienced a certain cerebral jumbling especially as I contemplated the issues in relation to infinity.  We learned that there are in fact different levels or degrees to infiniteness.  Take for instance, a number line starting with zero and going out to infinity.  How many numbers are on the number line? There is an infinite set of numbers on the number line.  But, suppose that the next question has a number line that starts with negative infinity and proceeds to positive infinity.  The answer as to how many numbers are on the line would still be an infinite set of numbers, but this infinite set of numbers would have to be argued to be a larger infinity than the first set.  This endeavor then progresses to the evaluation of numbers between two integers such as zero and one; it has been mathematically proven that there are in fact an infinite set of numbers between zero and one. The realm of mathematics progresses to an understanding of countable and uncountable infinities.[1]
This area of mathematics is still under discussion and exploration; I am far from an expert on these things, but contemplating the trinity reminded me of contemplating the differences in countable and uncountable infinities, and thus the search for the largest infinity.  I believe this area of mathematics has a contribution to be made to the understanding of the trinity.  The problem that many face in understanding the trinity is basically a mathematical problem.  How can there be three persons who are fully God and yet there is one God?  How can three be one?  As a side note, infinity plus infinity plus infinity equals infinity.  Through this essay I seek to outline that there are in fact three persons, all three persons are fully God, and there is one God while integrating an understanding of infinity in relation to God.[2]

While never offering a concise definition of the trinity, Scripture does outline the concept and it definitely demonstrates the three persons in several locations.  In Christ’s baptism there seems to be the presence of all three at once, in one locality.  After Jesus’ resurrection, he offers the Great Commission in which he instructs to baptize, “in the name of the Father and of the Son and of the Holy Spirit” (Matthew 28:19). While Jesus uses the singular “name,” he lists the three persons.  Thus it could be said, “One God, three persons.”  Passages such as 2 Corinthians 13:14 and Ephesians 4:4-6 make mention of all three of the persons.  These passages point to a difference in role and work between the three.  So, it cannot be said that there is no difference between the three, because Scripture clearly outlines different jobs that the three are performing in things such as creation and redemption in many cases those jobs are happening simultaneously, so the explanation that modalism offers falls short.  Modalism tries to protect the oneness of God at the expense of the three persons by claiming that there is one God that takes on the three different modes.  The fact of the matter is that in role, function, and person the Father does not equal the Son or the Holy Spirit nor does the Son equal the Holy Spirit.  On the level of personhood the three are mathematical inequalities.

Each Person is Fully God

Due to the authority / submission structure within the Godhead, it is easy to think of the Father as being God and the Son being kind of a mathematical subset of God and the Holy Spirit being a subset that proceeds from the other two.  The problem here lies in a fallen, sinful perspective on authority / submission.  All three persons of the trinity are fully God therefore authority does not come from possessing more power or being more perfect, authority comes from love and submission within the Godhead.  The argument here lies in the fact that all three persons fully possess every attribute of being God.[3]  Let us examine individually the claim that each person of the Godhead holds on being fully God.
There is little contention about the fact that the Father is fully God.  Matthew 6:9 points to this fact along with a plethora of other passages.  Debate has arisen on the full divinity of the Son.  Matthew 1:23 points from his birth (the incarnation) to the fact that he is God.  Questions have arisen over the eternality of the son.  Was he “born” or “begotten?”  John 1 points to the eternal existence of the Son alongside the Father.  He was “in the beginning” (John 1:1-14).  This would combat heresies such as Arianism claiming that there was a time when the son was not, therefore making him less than fully divine because he does not possess the trait of eternality from time past.  Jesus does not correct Thomas when he bestows upon Jesus the title, “My Lord and My God” (John 20:28).[4]
There is some problem with full acceptance of the full divinity of the Son when one considers passages such as Mark 13:32.  It appears that the son is limited in the area of omniscience.  To understand the answer to this problem, one has to understand the fact that son willingly submitted himself to being limited in certain of his attributes in the incarnation.  Much of this ties in with the study of Christology beyond just the study of Trinitarianism, but it is interesting to note the change in Christ’s answer to the same question after the resurrection, once he would no longer be limited.  In Acts 1:7, Christ states that it is not for the disciples to know the date, he no longer claims to not know the date himself.  This points to a willing submission of certain of his powers as the incarnate Christ.  A weak illustration would be as follows: Say I have a friend that has an automobile that can only turn left.  Now say I am going to go somewhere and that friend is going to follow me.  I would have to plan my trip and only take left hand turns to get to where we are going.  I am thus limiting myself and my driving to only being able to turn left, but this does not mean in my essence or the essence of my vehicle that I cannot turn right; I have simply limited my ability.  This is to say that Christ’s abilities were limited from the incarnation to the resurrection (or at least until the death on the Cross), which does not mean that the person of the Son in the Godhead does not possess and have in his essence all of the attributes of the trinity.
The Holy Spirit probably has the least scriptural support for a claim of total divinity.  The best passage has to be Acts 5:3-4 where lying to the Holy Spirit is equated with lying to God, thus the Holy Spirit is God.  In Hebrews the Holy Spirit is accredited with making claims that the Old Testament accredits God with making (Heb 10:15-17).  Certain attributes of God are accredited to the Holy Spirit in Psalms 139:7-8 (omnipresence) and 1 Corinthians 2:10-11 (omniscience).  Which leads back to the mathematical analysis of the concept of the largest infinity in relation to the trinity.
I would like to propose that God possess the largest infinity of each and every one of his attributes.  So, to answer the question how much love does God possess, God possesses the largest uncountable infinite set of love.  God’s wrath is infinite; His justice is infinite; His knowledge is infinite; his presence is infinite; his power is infinite; His freedom is infinite; His holiness is infinite; His peace is infinite; His righteousness is infinite; His jealousy is infinite; His goodness is infinite.  Thus I am claiming that to be God means to be in possession of the largest possible infinity of every one of his attributes.  Therefore, as each person of the trinity is seen as being fully God, each person of the trinity possesses the largest possible infinity of each and every attribute.  Which leads into the discussion of the oneness of God.

There is One God

So far no logical contradiction should be found with the claims that there are three persons and that all three persons are fully God.  There are however no shortage of passages claiming that there is one God: 1 Timothy 2:5, Deuteronomy 6:4-5, 1 Corinthians 8:6, Isaiah 45:5-6, and James 2:19 to state a few.  So it is well supported that the Bible outlines three divine persons and yet only one God.