What did Jesus say about Syrians? 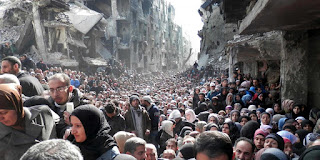 The Syrian people are caught in a hopeless mess of warring nations, travel bans, chemical weapons, Tomahawk missiles, and a lot of people just wanting to be safe and have hope for a better life for their children.  I was recently confronted with the realities of what is going on in this part of the world and then was confronted with a passage of scripture that I was preaching on that week. The text at hand was Luke 4:16-30.  Jesus is teaching in the passage and he quotes from Isaiah 61:1-2:


The Spirit of the Lord is upon me, because he has anointed me to proclaim good news to the poor.  He has sent me to proclaim liberty to the captives and recovering of sight to the blind, to set at liberty those who are oppressed, to proclaim the year of the Lord's favor.

Then Jesus goes on to tell them that, "Today this Scripture has been fulfilled in your hearing." The crowd is thrilled.  Jesus is saying that He is the promised Messiah come to save them! How exciting!  Who isn't excited about good news to the poor, liberty to the captives, sight to the blind, liberty to the oppressed and the proclamation of the Lord's favor? Because if we are honest when it comes to our standing before a holy and righteous God we all are poor in spirit; we all are captives to sin; we all are blind in our iniquity; we all are oppressed; so, we can all rejoice at the proclamation of the Lord's favor!

But then things get weird.  We have to assume these people knew the passage from Isaiah very well, and they would be wondering why Jesus stopped quoting where he did.  The next part of Isaiah 61:2 says, "and the day of vengeance of our God."  This was the part the Jews were the most excited about.  They were ready for their messiah to come and exact vengeance on all their enemies.  They  had been persecuted and marginalized by so many nations and they were looking for retribution.  They did not understand that Isaiah's prophecy is referring to two different moments in time.  The part Jesus quoted refers to when He came the first time and his current ministry in the world, the second part refers to when He will come again.

The account in Luke goes on and the people become outraged because instead of going on to lay out a plan for vengeance against the enemies of Israel, Jesus offers examples of the kinds of people he came for.  People like Naaman the Syrian.

Naaman is a popular Old Testament story today.  We like to teach our children the importance of Naaman being obedient to God by humbling himself and washing in the Jordan.  We can glance over the fact that Naaman was a terrorist from Syria.  He led attacks against the Jews that devastated their country and even stole their children.  Naaman was the epitome of who the Jews wanted God's vengeance to burn against, and Jesus said that He came for the Naaman's of the world.

The crowd is outraged at what Jesus is saying and they aspire to kill him for it!  But Jesus being Jesus just walks through their angry mob and goes about the work he was on earth to do.

So, while there are many geopolitical aspects going on in the world today relating to Syria, there is one fact that the Christian must not miss:  Jesus came to love and to save Syrians, especially the poor, the captives, the blind, the oppressed, and even the terrorists.  And the question we are confronted with is this: Is my approach to the Syrian situation in line with Jesus or the crowd that wanted to stone him?

Click here to hear my full message on this topic.